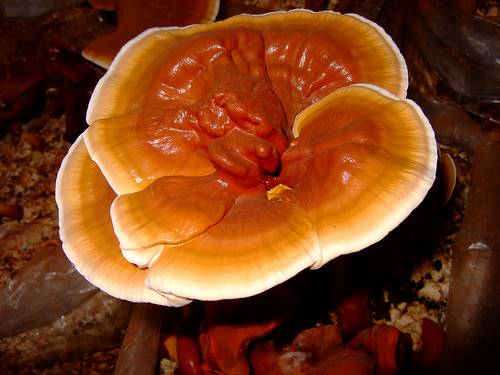 The Role of Reishi Supplements in Cancer Management

Ganoderma has been used as folk medicine since ancient times and it is a popular health food frequently promoted as a cancer cure. It is now well established from in vitro and animal studies that the polyshaccharide fraction of Ganoderma is largely responsible for its anti-tumor efficacy. Although there is yet no controlled clinical trials in humans for Ganoderma against cancer to date, the indications for its supplemental use can be indirectly supported with clinical trial data from comparable fungal polysaccharides because of a common final pathway of action mediated via beta-glucan receptor. Based on such indirect data, indications for Ganoderma use in cancer include supplementation a) to reduce side-effects during chemotherapy or radiotherapy, b) to prolonging survival and minimize metastasis, c) to improve quality of life, and d) to prevent occurrence or recurrence. In sum, although the cure of any cancer with Ganoderma alone is unlikely, it is probably beneficial under defined circumstances in most cases of malignancy.

Ganoderma has been recognized traditionally and scientifically as potentially useful in the treatment of cancer, but there is a notable discrepancy with the publics frequent impression that ganoderma may be a cure for cancer and the lack of clinical trials demonstrating such efficacy. We intend to summarize the extent of available theoretical, experimental and clinical data for the use of Ganoderma Supplementation in cancer and outline its indications, especially in the context of clinical results from bioactively similar polysaccharide derived biological response modifiers (BRMs) from other fungi (Mizuno 1996).

Ikekawa et al. (1968) first reported on the efficacy of soluble extracts from Ganoderma in inhibiting transplanted sarcoma 180 in mice. This host-dependent anti-tumor activity has been subsequently confirmed to be from the polysaccharide fractions of Ganoderma (Sasaki et al., 1971). Multiple similar studies subsequently confirms this observation and anti-tumor efficacy of Ganoderma has been demonstrated from various species, at different stages of growth and using different solvents for extraction and different routes of administration. Anti-tumor activity has been demonstrated in vitro as well as in syngeneic tumor systems in animals. However, no human trials of Ganoderma against cancer in peer reviewed journals nor any controlled clinical trials in humans have yet been conducted or published.

From a theoretical point of view, it is important to note that other fungal polysaccharides of comparable structure and function as those found in Ganoderma have undergone rigorous clinical trials, including Lentinan, Sizofilan, PSK (Krestin), PSP. Since it is now increasingly clear that immunostimulatory bioactivity from most beta-glucan based compounds function via a similar beta-glucan receptor (Czop 1985), it has been possible to hypothesize that Ganoderma polysaccharides should function similarly (Chang, 1996). Clinical effects of various glucan based BRMs should therefore be comparable. Results from Lentinan, Sizofilan, PSK and PSP human trials demonstrated the efficacy of these glucan BRMs in prolonging survival in recurrent or advanced gastric and colon cancer, lung cancer and gynecological cancers, Data from such bioactively comparable compounds all suggest improved quality of life or survival for cancer patients may be possible with Ganoderma supplementation.

Indications and Evidence Supporting the Use of Ganoderma Supplementation in Cancer

Whilst some efficacy of Ganoderma in cancer is undoubted, it remains important to specify the various indications and cite the evidence to support its use. This can be discussed under four different circumstances:

A. As a supplement during chemotherapy or radiotherapy to reduce side-effects such as fatigue, loss of appetite, hair loss, bone marrow suppression and risk of infection. There are studies demonstrating Ganodermas efficacy against fatigue (Yang 1994), hair loss (Miyamoto et al. 1985), and bone marrow suppression (Jia et al. 1993) and the presence of similar clinical evidence for other glucan BRMs applied in the setting of cancer chemotherapy or radiotherapy (Shi 1993) lends further support to the supplementation of Ganoderma in combination with cytotoxic cancer therapies. The recommended dose should be in the range of five to ten grams of fruiting body or equivalent per day (Chang 1994).

B. As a supplement for cancer patients to enhance survival and reduce likelihood of metastasis. While only anecdotal data exists that ganoderma supplementation may enhance survival of cancer patients, this survival advantage has been demonstrated for a number of comparable glucan BRMs. Specifically, Lentinan use in advanced or recurrent gastric cancer demonstrated a significant life span prolongation advantage at 1, 2, 3 and 4 years in a randomized control trial (Taguchi 1987). Sizolan given together with chemotherapy enhanced survival of cervical cancers irrespective of stage in a prospective randomized controlled trial (Inoue et al. 1993), significantly enhanced survival (P.01) in lung cancer patients (Honma 1982) and improved five year survival of head and neck cancer from 73.4 to 86.7% was noted in another small study (Kimura et al. 1994). More appropriate for comparison to Ganoderma is perhaps PSK or PSP, which are orally administered. Mitomi et al. (1994) found significantly improved survival and disease-free survival (P=0.013) in resected colorectal cancer given PSK supplementation over three years when compared to control in a multi-center randomized controlled trial.

In an animal model, Ganoderma has been demonstrated to effectively prevent metastasis (Lee 1984), and these results are comparable to those of Lentinan (Suga 1994). Other glucan BRMs have been demonstrated to effectively prevent or suppress pulmonary metastasis of methylcholanthrene-induced sarcomas, human prostate cancer DU145M, and lymphatic metastasis of mouse leukemia P388 (Kobayashi et al. 1995). The recommended dose should be five to ten grams or more of fruiting body or equivalent per day, with a linear enhancement in efficacy expected up to 30 grams per day (Chang 1994).

D. As a supplement for the prevention of occurrence or recurrence of cancer. Since immune stimulation, especially Natural Killer (NK) and Cytotoxic Lymphocyte (CTL) activation may be effective in the immune prevention of cancer by enhanced immune surveillance (Lotzova 1985), and Ganoderma has been demonstrated to enhance NK and CTL activity when administered orally (Won et al. 1989), it is thus a candidate for prevention of the occurrence or recurrence of cancer. Stavinoha et al. demonstrated the efficacy of Ganoderma in preventing the progression of microadenomatous growths in animals (Stavinoha 1993), and the efficacy of other glucan BRMs in primary and secondary cancer prevention have been similarly demonstrated in vitro, in vivo and in clinical trials.

Although Ganoderma and its derivatives are not pharmaceuticals and have not undergone rigorous clinical trials to be tested against cancer, there is abundant use in vitro, animal and indirect clinical evidence to support its supplemental use in cancer. Standardization in bioactive polysaccharide content and dosages will be necessary to assure its rational use, and clinical trials in select cancers with defined endpoints will confirm its efficacy.