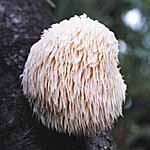 * This species has many names including the bearded tooth mushroom and the pom pom mushroom. It is sometimes called the hedgehog mushroom, although that name usually refers to a different species altogether, Hydnum repandum.

* All species of Hericium are considered saprotrophs, meaning they feed on dead material. Hericium erinaceus is also a parasite, meaning it attacks and kills living trees.

* They’re found in late summer to fall on dead or dying hardwood trees, especially oak and beech. They grow in North America, China, Japan, and Europe.

* This doesn’t look like your typical mushroom. It has no real cap and no stem. Instead it sports long spines (greater than 1 cm) coming out from a single clump.

* Their color is mainly white, although they become brown or yellow with age. Their spore print is white as well.

* This is not a common species of mushroom, so finding one may be a rare treat. They grow higher up on trees rather than at the base, which means that they’re also often missed during a mushroom hunt.