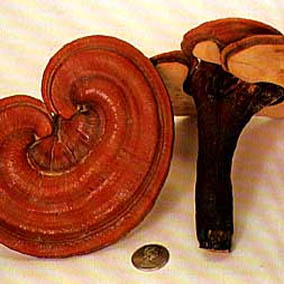 There seems to be a constant babble about whether people with candida overgrowth should avoid mushrooms for the sake of their health. Most people, including “experts” will tell you not to consume mushrooms of any kind.

Not all mushrooms need be avoided.

The ones you do want to enjoy include shiitake, maitake (both culinary delights) and reishi mushrooms (not so delicious, usually taken as reishi mushroom extract). In fact, reishi mushrooms can help your immune system to regain balance over the invasive form of candida. Remember, candida is a natural element in the human body, it only becomes invasive and detrimental when it is given an opportunity to grow out of control, which happens when the immune system is weakened.

“Candida and Mushrooms? I’ve heard to avoid mushrooms if my health is suffering due to candida overgrowth.”

I know, me too! But for many years I’ve known about the healing effects of shiitake and reishi mushrooms. I ate shiitakes while I was doing my cleanse diet, and never felt any ill effects.

Finally I’ve been taking the time to research it more for myself and my results are really pleasing! Here is some of the encouraging information I’ve been gathering about reishi mushroom extract, maitake and shiitake mushrooms:

Did you know that some fungi are more closely related to animals than plants are to those same animals? And that some diseases which affect fungi can affect humans as well? I didn’t until recently. Weird, but true.

For instance, three pathenogenic microorganisms which cause diseases common to fungi and humans (these are ones I know of, I’m sure there are more):

One of medicinal mushrooms’ natural defenses is to produce antibiotics to fight infection from microorganisms. In fact, antibiotics commonly prescribed at the doctor’s office are often derived from fungi.

There is an increasingly accepted hypothesis in modern medicine that polypore mushrooms like reishi mushroom extract and maitake mushrooms can help provide a immune “shield” against a number of infectious diseases, including candida. Shiitake mushrooms, while not polypores, are also known for their immune enhancing properties.

One of the beneficial elements in these medicinal mushrooms are certain polysaccharides, which are a form of complex carbohydrates. Cellulose (plant fiber) and pectin (found in fruits such as citrus, apples and pears) are two other well known forms of polysaccharides.

Okay, once again, let me reiterate that I’m no scientist, but I am an avid reader and always poking around for new and interesting information. Here’s some more information I’ve dug up on reishi mushrooms and other healing mushrooms – some of which even I wouldn’t attempt to explain scientifically, but nonetheless I find it compelling because there is an abundance of scientific and medicinal research coming back with positive results.

Reishi Mushrom Extract and other Medicinal Mushrooms Are Beneficial For Numerous Reasons
Reishi mushrooms and the other healing mushrooms contain an abundance of not only “polysaccharides” but also “protein-bound polysaccharides”, including the much touted beta-D-glucans, which is one reason they all possess such potent immune-strengthening properties (beta-D-glucans is primarily used for immune enhancing properties as well as its ability to help lower cholesterol).

Other medicinal herbs and plants including Aloe Vera, Echinacea and Astragalus contain polysaccharides, which are believed to be a major part of their immune-enhancing actions. Protein-bound polysaccharides found in the medicinal mushrooms have been shown to be even more effective for immune responses than individual polysaccharides.

Thus, it’s hypothesized that the protein-bound polysaccharides found in mushrooms such as reishi mushroom extract, maitake mushrooms and shiitake mushrooms are extra-beneficial for people whose health is compromised by candida overgrowth.

They also contain sterols and triterpenes which have been demonstrated to help lower blood pressure and serum cholesterol levels as well as reduce inflammatory responses.

They’ve also been shown to protect and enhance liver function, which is great news for candida sufferers, since the liver is working overtime to process the toxins produced by the candida yeasts.

All mushrooms are surprisingly rich in protein and B vitamins (which help to relieve stress, depression and fatigue commonly associated with candida and poor health in general).

They’re also the only non-animal source of vitamin D that I know of. The USDA’s recommended daily intake of Vitamin D is 200 IU (international units), which is considered a very low estimate by numerous health experts. All mushrooms synthesize vitamin D from natural sunlight (or even artificial light), but look at the comparison between regular button mushrooms and shiitake mushrooms:

100 grams of white button mushrooms contain an average of 18 IU of vitamin D.

100 grams of shiitake mushrooms contain an average of 96 IU of vitamin D!!

Vitamin D deficiency is being linked to many health problems, so make sure you’re getting enough every day. Remember, vitamin D is synthesized by the body from sunlight, or obtained from food sources like cod liver oil, salmon, eggs, milk.

Or… from the shiitakes in your stir fry… Yum!!

I could go on, but I hope instead that these notes will encourage more readers to consider the benefits of Reishi mushroom, as well as cooking with maitake and shiitake mushrooms for candida, health and overall wellness.