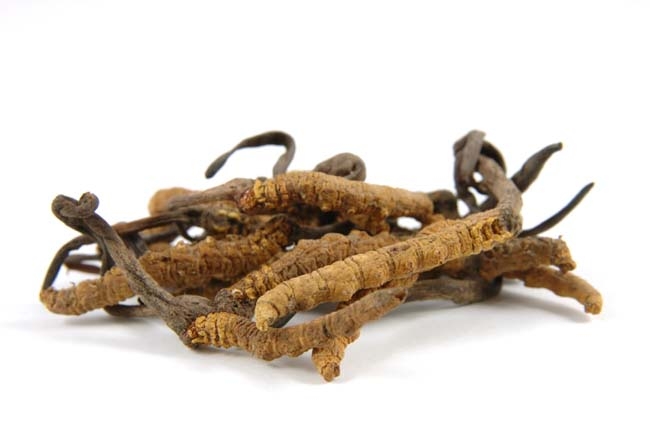 The Strange Mushroom with it’s Secrets

While most commonly known as Caterpillar Fungus, Dong Chong Xia Cao Tachukas and Deer Fungus, Cordyceps are a type of mushroom that is found scarcely in Sweden and Finland, very few Norwegian localities, and very isolated areas of southwest China. These incredibly rare types of mushrooms were first noticed more than 1500 years when the effects of their ingestion became evident in the health and vitality of grazing animals in the Tibetan Himalayan meadows. Herdsmen noticed that their sheep and cattle had become much stronger and healthier, thus drawing attention to their grazing patterns. Upon studying the diet of these animals, it was noted that much of their diet consisted of the thin, grass-like mushroom. As news of this miraculous mushroom spread, Chinese doctors soon attempted to use the medicinal properties of Cordyceps Mushrooms to treat diseases for which there had been no previous treatment. Simply by the spreading of the word, the Cordyceps became a revered drug in Chinese Culture.

In specific regions of China, many generations of proficient doctors have used the Cordycep Mushroom to address a great number of issues associated with circulation, respiration, sexual dysfunctions, and immune deficiencies. The Cordycep Mushrooms also are quite effective at staving off the effects of depression, many types of allergic conditions, colds and flues by means of helping to boost the energy supply of the lungs and adrenal glands. Due to the Cordyceps natural ability to boost stamina and energy and regulate one’s appetite and patterns of sleep, Cordyceps have won general health tonic classification. Quite often, it is recommended that those who suffer from the trials and tribulations of shortness of breath, depression, and general aches and pains due to stress ingest the Cordycep Mushroom due to their beneficial healing powers.

Of even greater importance, Cordycep Mushrooms have been proven to be quite beneficial to the treatment and prevention of various male potency issues, and a great number of diseases such as cirrhosis of the liver, rheumatoid arthritis, neurasthenia, and even the build up of excess fat around the waist and knee areas of the body. Various studies have also demonstrated that the Cordycep mushrooms are quite effective in the prevention of coronary heart disease, arteriosclerosis, and the reduction of the level of lipoproteinemia in the human blood stream. In traditional Chinese medical practices, the Cordycep Mushroom is quite often used for the kidney and lung meridians. In terms of relation to health benefits, it is well known that the Cordycep Mushroom also helps to prolong life and heighten the levels of naturally occurring antioxidants in the human bloodstream. Cordyceps are also quite adept at increasing the level of Andenoise Tri-phosphate in the mitochondrial part of human cells. This increase aids in increasing energy levels. It can be considerably beneficial to those who participate in sports and athletic events. Typically, those athletes who consumed the Cordycep Mushroom during their training cycle noticed significant gains in performance. In many instances, these athletes have succeeded in shattering world records and further legitimizing the Cordycep mushroom.

In terms of the kidney and lung meridians, Cordyceps are frequently prescribed for those with asthma, weak lung, coughs, asthma, shortness of breath, wheezing, and phlegm reduction. This also explains why those in sports seem to perform better. Those who need extra energy to perform certain tasks need stronger respiratory systems, which is what Cordyceps do for these individuals.

Cordyceps is said to be a natural aphrodisiac and is considered to be a type of sexual tonic for those suffering from sexual dysfunctions. The effect may not be as quick as other supplements for sexual dysfunction, but the strengthening effect is more profound. The kidney channel is fortified, which is the area that is responsible for desire and sexual energy. In countries such as China, Cordyceps are commonly used for those suffering from such conditions as erectile dysfunction, infertility, and impotence. Libido is improved, performance is improved, and sexual desire increases. Energy and physical endurance benefits as well. There have been a large number of studies that point out how Cordyceps stimulate the release of testosterone and improve blood flow in order to enable a stronger erection and make sexual sensations more improved. One such study was conducted at Beijing Medical University and it found that Cordyceps have a 64% success rate in those men suffering from erectile dysfunction.

There is also an anti-aging effect when it comes to Cordyceps, which is another ways in which it is considered a tonic. They help rejuvenate the body and they promote longevity. The Yin and Yang energy are replenished and strength is restored after physical activity. Studies have found that the powerful antioxidant superoxide dismutase is increased by Cordyceps and that these mushrooms also take out the free radicals that are responsible for premature aging and other diseases that are considered degenerative.

Overall, Cordyceps have been used to strengthen the body’s immune system against infections and diseases. Clinical studies have shown it to be a natural immune booster because the production of immune cells is increased significantly. In addition, the immune system is regulated. With all of these immune benefits, benefits to the bodily organs, and the effects on sexual disorders, Cordyceps make an excellent part of an individual’s diet.

The Power Within the Mushroom
By Omid Jaffari