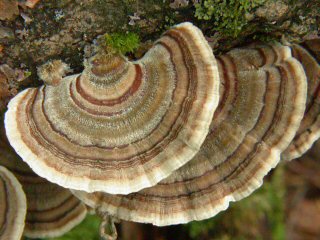 Turkey Tail mushrooms are one of the most researched and respected of the medicinal mushrooms. They are also one of the most common in the northern forests of world, from Europe to China and Japan, from Siberia to the US and Canada.

This member of the polypore family has longest history of medicinal use in China and Japan, where it is known as Yun Zhi and Kawaratake, respectively.

Turkey Tails are tough and chewy, so they are generally consumed by drinking the tea made by boiling them for a prolonged period. However, the eminent herbalogist Christopher Hobbs likes to chew the fresh fruitbodies like gum when walking in the woods.

Turkey Tail mushrooms are medically significant for many reasons (as the monograph below details) but they are most popularly known as being the natural source of the anti-cancer polysaccharide PSK. PSK (polysaccharide K) is a high molecular weight carbohydrate found in the fruitbodies and (in higher concentrations) in the mycelium of Turkey Tails. (See Spawn for a description of mycelium.) Check out this link, for more information on PSK as a cancer treatment.

Bastyr University has been involved in a recent clinical study using Turkey Tail extracts in conjuction with chemotherapy and radiation. Click here (and here) to read an article about the study and go here to read Bastyr’s complete monograph of Turkey Tails, which they primarily call Coriolus versicolor. (I have no idea why some scientists call it Trametes versicolor and others call it Coriolus versicolor. You would think they could all agree on one name.) Here are the highlights:

Pharmacodynamics
PSK fights cancers and tumors by inhibiting the growth of cancer cells and
by “stimulating a host mediated response.” Natural Killer cells are
also promoted to enhance the immune system. It is often used in
conjunction with chemotherapy to increase cancer survival rates. PSP is
being proposed as an inhibitor of HIV replication based on an in vitro study (4).

Krestin (PSK), a proprietary anticancer drug approved in
Japan, is extracted from the Turkey Tail mushroom and accounted for
25.2% of the total Japanese national expenditure for anticancer agents.
Nakazato et al. (1994), reported that 262 gastric cancer patients
treated with PSK as an adjunct to chemotherapy showed a decrease in
cancer reoccurrence and a significant increase in disease-free survival
rate. Kobayashi et al. (1995) reported that the protein-bound
polysaccharide PSK reduced cancer metastasis. Sakagami et al. (1993)
reported that PSK stimluted interleukin-1 and interferon production in
human cells. Other researchers have reported that PSK appears to be a
scavenger of free-radical oxidizing compounds. Unlike many conventional
anticancer drugs, PSK produces few, if any, side effects and shows no
immunosuppressive activity.”