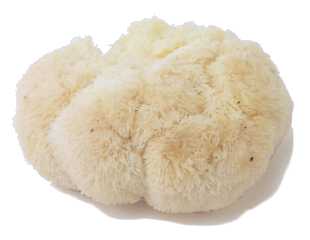 Lion’s Mane mushroom or Hericium Erinaceus is definitely a rising star among natural treatments for some of the world’s most difficult health problems.  This mushroom has been highly prized in Chinese tradition, where it was eaten exclusively by the Emperors.  Lion’s Mane’s medical benefits were claimed by Chinese doctors as a curative for problems of the digestive tract such as stomach and duodenal ulcers, as well as for cancers of the esophagus, stomach and duodenum.

Its beta glucan polysaccharides, along with polypeptides and fatty acids have a lot to do with these curative effects.  Clinical studies have shown that these polysaccharides, along with adenosine and oleanolic acids, stimulate induction of interferons and modulation of the immune system, boosting the white blood cell count to help the healing process.  These substances also enhance the function of the gastric mucus barrier, accelerate the healing of ulcers, and exhibit anti-inflammatory effects.

Lion’s Mane has also been shown to help regulate blood sugar and cholesterol levels.  It is completely safe, showing no signs of toxicity or side effects in any scientific research.  One of the most exciting areas of potential is its ability to  help combat some of the symptoms and underlying causes of dementia and Alzheimer’s disease as well as peripheral neurological dysfunction.

Dr. Hirokazu Kawagishi of Shizoka University Japan, a recognized authority on Lion’s Mane for the past 15 years, showed the mushroom to have the remarkable activity of stimulating the synthesis of Nerve Growth Factor (NGF).  A lack of NGF is considered one of the major causes of Alzheimer’s disease.

What is NGF?  NGF is a protein molecule that was discovered by Rita Levi-Montalcini and isolated by Stanley Cohen, for which they jointly recieved the 1986 Nobel Prize for Medicine.  It is synthesized in minute amounts in all vertebrate tissues.

Dr. Mark Tuszynski of University of California, San Diego explains that NGF is the prototype of the neurotrophion family of polypeptides.  They play an essential role in the differentiation and survival of several nerve cell populations in the peripheral and central nervous system.

NGF as a protein, however, cannot pass through the blood-brain barrier, the semi-permeable membrane between the blood and brain, which allows only small, lipid soluble molecules to pass through it.  NGF is too large to permeate the membrane; so in a brain with diminishing amounts of NGF, how do we maintain an adequate amount to support healthy neuron repair and renewal?

Dr. Kawagishi and his team isolated two types of molecules within Lion’s Mane which both stimulate NGF production and also crucially, pass unhindered through the blood-brain barrier.  The first of these substances is found in the fruiting body (the part of the mushroom which sprouts out of the ground or tree stump) and are called hericenones.  Hericenones stimulate the brain to produce more NGF.  An even more powerfully effective group of substances called erinacines were found in the mycelia (the root system) of Lion’s Mane.  Small enough to pass through the blood-brain barrier, erinacines work from within the brain to promote NGF production, which in turn helps make more neurons.   This is one of the most significant discoveries of the last 50 years and is why the Nobel Prize was awarded for its discovery.
As Paul Stamets, one of the world’s leading mycologists and author of several reference works on medical mushrooms, puts it, “Lion’s Mane mushroom mycelium is nature’s nutrients for your neurons.”  The Chinese have known this benefit for thousands of years, as the ancient herbalists promised nerves of steel and the memory of a lion to the privileged few who were allowed to east this restricted delicacy.

The erinacines, by promoting NGF production throughout the body, also help to alleviate symptoms of peripheral neurological dysfunction.  Dr. Will Boggs reports in Neurology magazine that NGF significantly improves the pain symptoms of HIV-infected patients with sensory neuropathy.  Sensory neuropathy affects as much as 35% of all AIDS patients.

Dr.  Giovanni Schifitto from the University of Rochester, New York studied the safety and effectiveness of human NGF for HIV-associated distal sensory polyneuropathy in 200 affected patients.  Their symptoms were significantly alleviated with the administration of the NGF.  As the numbers of sufferers needing some type of NGF replacement therapy climbs ever higher, and with no cure in sight from modern medicine, many people are starting to turn to Lion’s Mane mushroom as a real way to slow down and reverse the symptoms of these devastating diseases.

The breakdown in healthy neurological function can be prevented by adding Lion’s Mane mushroom to the diet.  A national trend to add Lion’s Mane to our daily supplemental requirements would go a long way to improve the quality and length of life.

The more we know about the intricate details of this wonder food, the more we begin to understand the prized value it held among the royal palaces of the Orient.