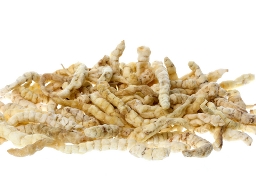 Dr. Oz on today’s live show talked about the use of Cordyceps to fight fatigue. Now Cordyceps is something that has been around in the sports nutrition community for quite some time. It’s a supplement used by a lot of runners actually. It allows them to breathe better and become less tired during their running.
So What is Dr. Oz’s Cordyceps Mushroom?

Cordyceps, one of the better-known traditional Chinese medicines, consists of the dried fungus Cordyceps sinensis growing on the larva of the caterpillar. It is commonly used in China for the replenishment of general body health. Cordyceps has a broad range of pharmacological and biological actions on the liver, kidneys, heart, and immune system. One of the known pharmacological effects is its anti-oxidation activity. Cordyceps sinensis, a well-known and valued traditional Chinese medicine, is also called DongChongXiaCao (winter worm summer grass) in Chinese.
Cordyceps Benefits

Increases energy level. In ancient China Cordyceps Sinensis has initially been used as a energy tonic. Cordyceps increases the cellular ATP level and oxygen utilization, which leads to a real increase in actual energy that is available for use.

Regulates blood pressure. The research has shown that administration of Cordyceps can help with regulating blood pressure and blood supply.

Take 3 grams per day spreadout through the day,