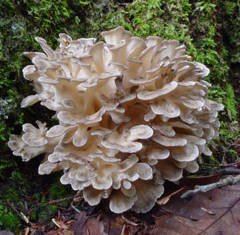 Maitake is an edible mushroom from the species Grifola frondosa. Maitake D-fraction® is an extract of this large mushroom native to the mountains of northeastern Japan. The maitake mushroom is eaten as a food, and maitake-D fraction is marketed as a dietary supplement in the United States and Japan. The substance in the maitake mushroom is thought to be active in humans and is called beta-glucan.
Overview

Research has shown that maitake D-fraction has effects on the immune system in animal and laboratory studies. There is no convincing clinical evidence to date in available peer-reviewed medical journals reporting that the maitake mushroom is effective in treating or preventing cancer in humans, although some human research is now underway.
How is it promoted for use?

Promoters claim that maitake mushroom extract boosts the immune system and limits or reverses tumor growth. It is also said to enhance the benefits of chemotherapy and lessen some side effects of anti-cancer drugs, such as hair loss, pain, and nausea.
What does it involve?

Maitake D-fraction is available in liquid extract, tablet, and capsule in health food stores, although the amount of beta glucan contained in each form may vary. The usual dosage of dried mushroom is between 3 and 7 grams daily. Maitake mushrooms are also available in grocery stores and can be eaten as food or made into tea.
What is the history behind it?

For thousands of years, Asian healers have used certain edible mushrooms in tonics, soups, teas, prepared foods, and herbal formulas to promote health and long life. Until recently, the healing properties of mushrooms have been the subject of folklore only. In the past few decades, however, researchers in Japan have been studying the medicinal effects of mushrooms on the immune system, cancer, blood pressure, and cholesterol levels.

The Japanese word “maitake” means “dancing mushroom” because people in ancient times were said to dance for joy when they found these mushrooms, which were literally worth their weight in silver. Modern research on the maitake mushroom and its D-fraction extract began in Japan in the mid-1980s and has only recently spread to the United States.

As of the early 21st century, much has been written about maitake and its purported magic healing qualities. This has sparked a great deal of interest in its use for various human illnesses.
What is the evidence?

Maitake mushrooms and the maitake D-fraction prepared from them contain a type of polysaccharide (a large molecule formed by multiple sugar molecules linked together), called beta glucan (sometimes called beta glycan). Beta glucan is found in several mushrooms, yeasts, and other foods. A polysaccharide is a large and complex molecule made up of smaller sugar molecules. Beta glucan is believed to stimulate the immune system and activate certain cells and proteins that attack cancer, including macrophages, T-cells, natural killer cells, and interleukin-1 and -2. In laboratory studies, it appears to slow the growth of cancer in some cell cultures and in mice.

Most of the research on maitake D-fraction has been done in Japan using an injectable form of the extract. A 1997 study published in the Annals of the New York Academy of Science found that maitake D-fraction was able to enhance the immune system and inhibit the spread of tumors in mice implanted with breast cancer. In a 1995 report published in the same journal, researchers concluded that maitake D-fraction was able to activate the immune systems of mice that had been injected with liver cancer cells. The extract seemed to prevent the spread of tumors to the liver and prevent the development of cancer in normal cells. A nonrandomized study of fifteen dogs with lymphoma did not find any evidence of benefit from the use of maitake extract.

While animal and laboratory studies may show a certain compound holds promise as a beneficial treatment, further studies are necessary to determine whether the results apply to humans. In 2002, a group of Japanese people with different types of cancer were given maitake D-fraction and maitake powder in addition to standard cancer treatment. Although the researchers thought some patients showed improvement, the study did not include a control group. Because of limitations in the study design, no reliable conclusions can be drawn. It is impossible to say for certain whether any effect was caused by the maitake treatments or standard cancer treatments the patients also received. More scientifically designed studies are needed to determine maitake’s potential usefulness in preventing or treating cancer.

The National Cancer Institute is sponsoring a very early (Phase I) study at Memorial Sloan-Kettering Cancer Center to learn whether beta glucan can increase the effectiveness of rituximab (a drug used for treating some types of lymphoma and leukemia) by increasing cancer cells’ sensitivity to it. This clinical trial is studying the side effects and best dose of beta glucan when given with rituximab. It will look at young patients with relapsed or progressive lymphoma, leukemia, or similar disorders.

In another clinical trial, beta glucan is being tested together with other drugs to learn whether they increase the effectiveness of a monoclonal antibody (3F8). Combining different types of biological therapy may kill more tumor cells. This is a small open label trial (so called because both patients and researchers know which treatment is being administered) in patients with neuroblastoma that has not responded to treatment. A trial of maitake extract as treatment for breast cancer is also in progress.
Are there any possible problems or complications?
This product is sold as a dietary supplement in the United States. Unlike drugs (which must be tested before being allowed to be sold), the companies that make supplements are not required to prove to the Food and Drug Administration that their supplements are safe or effective, as long as they don’t claim the supplements can prevent, treat, or cure any specific disease.
Some such products may not contain the amount of the herb or substance that is written on the label, and some may include other substances (contaminants). Actual amounts per dose may vary between brands or even between different batches of the same brand.
Most such supplements have not been tested to find out if they interact with medicines, foods, or other herbs and supplements. Even though some reports of interactions and harmful effects may be published, full studies of interactions and effects are not often available. Because of these limitations, any information on ill effects and interactions below should be considered incomplete.

The maitake mushroom itself has been used as food for centuries and is generally presumed to be safe. So far, studies have not shown any adverse effects from maitake D-fraction or beta glucan, but human studies of their effectiveness in treating cancer have not yet been completed.

In animal studies, beta glucans of the type in maitake mushrooms lowered blood sugar and should be used with caution in people with low blood sugar (hypoglycemia) or those who are on medicines to reduce or control blood sugar. Beta glucans also reduced blood pressure in animals and may have a similar effect in people. Additional studies are needed to find out whether these effects occur in humans.

Allergies to many types of mushrooms, including maitake, have been reported. Relying on this type of treatment alone and avoiding or delaying conventional medical care for cancer may have serious health consequences.

Medicinal mushrooms have been a large part of eastern medicine for many years. In Japan and China they are commonly used as an alternative to chemotherapy. By boosting the bodies immune system and balancing out the bodies function, they are able to prevent and treat many of the Illness’ and disease we face today.

Keeping medicinal mushrooms supplements a part of your daily routine, helps to ward off some of these ailments before they happen, for instance someone who takes Red Reishi mushroom regularly may after a few weeks notice a lack of fatigue, and reduction in stress. They may notice they are not getting the colds and flu’s others around them are getting. A general sense of well being that did not exist before is common. 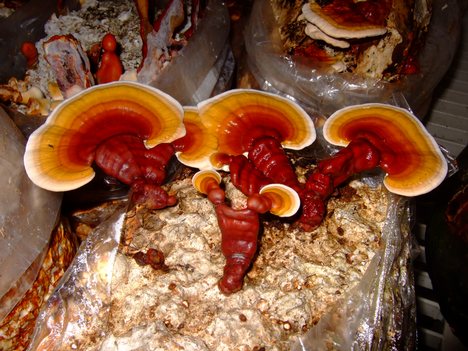 The Power Within the Reishi Mushroom

Reishi mushroom is arguably the most revered herbal substance in Asia. certainly ranking with Ginseng as the elite substance for attainment of radiant health, longevity and spiritual attainment. It has maintained that position for at least 2000 years, and its reputation and value are only increasing. Since Reishi mushroom has been known to have many functions, it has been the subject of a great deal of research in recent years. It is safe, being non-toxic.

Reishi mushroom has traditionally been used as an anti-aging herb and has been used for many diseases and disorders a well. Daoists have continuously claimed that Reishi mushroom promotes calmness, centeredness, balance, inner awareness and inner strength. They have used it to improve meditative practices and to protect the body, mind and spirit so that the adept could attain both long and healthy life and spiritual immortality.

Reishi is s superb ant-stress herb. Throughout history it has been used to bring balance into the lives of people who needed it the most in that department, and that means mostly everyone. Deep in antiquity, it was routinely used by mountain hermits, monks, Daoist adepts and spiritual seekers throughout Asia because it was and is believed to help calm the mind, ease tension, strengthen the nerves, strengthen memory, sharpen concentration, improve focus, build will power and, as a result help build wisdom. That is why it was called “Mushroom Spiritual Potency” by these seekers. The people of Asia have never lost their faith in Reishi Mushroom.

The Immune Building Effects of Reishi

Reishi is a profound immune potentator. It has been found to significantly improve the functioning of the immune system whether the immune system is deficient or excessive. In this sense, it is an immune “moleculator” – that is, it helps to modulate, or regulate, and fine-tune the immune system. Our immune system is virtually miraculous network of activates designed over millions of years to protect us from viruses, bacteria, parasites, molds, dust, pollen and malignant cells. It is the responsibly of the immune system to detect the intrusion, or invasion, of these entities and to mount a defense in order to eliminate them. A healthy immune system is capable of resisting most such intruders and a very hardy system may be able to resist invasions that many other people cannot. If the immune system is weakened or malfunctioning, the invading microbes can easily establish a foothold in our body and disease sets in. Antibiotics can often be used to stop the invasion at this time, but chronic use of antibiotics further weakens the immune response.

As we have seen very briefly the qualities of Reishi mushroom, but we could never know all of them. Thus, before leaving you to read on about other mushrooms, I just want to point another good quality of Reishi mushroom that is beneficial to us. Reishi mushroom has also been known in recent studies to help with reduce the side effects of many kinds of chemotherapy and radiation treatment and simultaneously contribute to the rebuilding of the immune system – an essential part of recovery from cancer. This process is triggered by stimulating the production of interferon and interleukins I and II, all being potent natural anticancer substances produced in our own bodies.

The Power Within the Mushroom
By Omid Jaffari